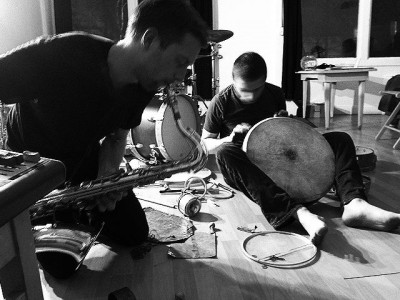 DUO GUILHERME RODRIGUES / JOHAN MOIR
With the use of extended techniques, preparations, harmonics and multiphonics the duo of Johan Moir & Guilherme Rodrigues dives into a myriad of sound exploration. By letting small sounds and minimalistic movements be central in the music, they dwell in soundscapes where the cello and double bass can intwine, merging as one entity, creating a singular new identity.

Johan Moir and Guilherme Rodrigues met while they were both residing in Berlin 2016 and has since then collaborated together. The duo recorded their debut Album “Hollow Wood” at Studio Boerne in Berlin, which was released at Creative Sources in April 2018.

Was born 1988 in Lisboa, Portugal and started playing cello and trumpet at Orquestra Metropolitana de Lisboa at the age of 7. In 1999 joined Conservatório Nacional de Música de Lisboa to study classical and music theory and in the current year recorded his first album – Multiples – with Ernesto Rodrigues and José Oliveira out on Creative Sources Recordings.

Apart from work in music ensembles ranging for contemporary classical to free improvisation, also works with live music poetry, theatre and film-music. After lengthy residency in Lisboa, (1988-2016) moved to Berlin and has been active as composer and improviser in the scene.

Has performed and toured in all Europe. Released more than 40 albums of his own projects.

Johan Moir is an improvising Double Bass player & composer from Sweden. In his playing, Johan explores the acoustic possibilities of the double bass by using extended techniques and preparations as well as his knowledge in just intonation, to create an interesting flow of overtones and soundscapes.

After being based in Gothenburg, Melbourne and Berlin, Johan is now based in Stockholm. Johan has toured in various European countries as well as in Australia, Mexico, Taiwan, Palestine and the US. Johan has released several albums with different projects, such as “transitions” with SVELIA (2015), “Chasing Shadows” with Johan Moir Ensemble (2015) and “Ignition” with the duo Ignite in 2018.

Foster/Bennett Duo
Michael Foster is a Brooklyn based saxophonist, improvisor, multi-instrumentalist, and curator working within the fields of free improvisation, composition (both graphic and notated), Jazz, noise, punk, and industrial music and video. His work explores the overlap of instrumental preparation, noise, and queer theoretical practices, focusing on methods of queeringimprovisational practice and his approach to the saxophone and extensive preparations. In addition to his work as a performer, Michael foundedQueer Trash, a series focused on supporting LGBTQIA+ artists engaged in experimental performance. Queer Trashwas awarded the 2018 Suzanne Fiol Curatorial Fellowship at Issue Project Room, where they will be hosting performances and workshops throughout the year. His current projects include duos with Leila Bordreuil, Lydia Lunch, Richard Kamerman (as The New York Review of Cocksucking), and Ben Bennett. Other projects include collaborations with Sarah Hennies, Marina Rosenfeld, William Parker, Steve Swell, Weasel Walter, Brandon Lopez, Psychic TV, a new quartet with Nate Wooley, Brandon Lopez, and Ben Bennett, and many others.

Ben Bennett is an improvising percussionist who plays drums, percussion, and membranophones, which are combined with each other in various mutable arrangements, and played by striking, friction, breath, and other techniques. His instrumentation and his music are a radical distillation of the modern drumset and the diverse traditions of improvised music. He has toured in extensively in the U.S. and Internationally, playing with different groups, ad-hoc collaborations, and solo. Recent collaborators include Leila Bordreuil, Tashi Dorji, Sandy Ewen, Michael Foster, Judith Hamann, Travis Laplante, Fred Lonberg-Holm, Brandon Lopez, Ilan Manouach, Bhob Rainey, Jacob Wick, Nate Wooley, and Jack Wright.

“The crux of Bennett’s output is formed through his anomalous showmanship and in the resourceful nature of the instruments he tailors. If there is “value” to be found in his art, then these aspects surely make for a sensible starting point. Recycled objects and household items are transformed into contraptions assembled for a purpose unknown to the performer until the very moment he drags them before baffled onlookers, inserting them into an orifice or smashing them with an unrelated implement. Such instances of universal obscurity add to the queer web of noise that makes the resulting sound so riveting from the perspective of the audience.” -Tiny Mixtapes

“Bennett and Foster’s crazy improvisations landed somewhere between music and performance art. Their duo project resulted from their strong musical affinity, something that needs to be seen (as well as heard) to be believed, pushing the sonic boundaries of the drums/sax duo over the edge. At times their vocabularies overlap, so one is barely able to distinguish one voice from the other, Foster becoming compellingly percussive on the sax, while Bennett, who also makes his own instruments, blows on what I learned were membranes, like reeds—I recently caught them at drummer Andrew Drury’s salon series Soup and Sound. Their experimentation in sound, both together and separately, causes a dynamic shift and expansion of the sonic palette, plus a tense, vulnerable unpredictability. My bet is on these guys for adding to the healthy, solid future of improvised music.”

As the first patterns of In Itbegin to emerge, a realization of why Ben Bennett is increasingly considered a drummer of note. Following a killer solo effort on Astral Spirits last year (Trap), he returns to the label, joined by the Brooklyn-based saxophonist / improvisor Michael Foster, who, like Bennett, has assembled a remarkable laundry list of collaborations over the last five years. Together the occupy a startling and optimistic vision for the territories of improvised sound.

Foster and Bennett represent an interesting juncture in the history of music – a younger generation pushing the accomplishments of those previous, forward. Though perhaps easier to categorize their efforts as free improvisation, and thus free of politics and association, In Itis Free Jazz through and through. An American music tinged with the blues, returning home. While the classification “free improvisation” is generally considered to be more benign, the term is among the most pregnant of all. It came to prominence on two fronts – used by Free Jazz players in an attempt to liberate themselves from the critical categories long associated with Jazz, and by European players who wanted to distance themselves from the American tradition from which they drew. Whether recognized or not, these terms are loaded signifiers. Free improvisation, as a history, category, or determinant, is a double edged sword. Particularly in Europe, its beginnings are bound to cultural appropriation, but it equally instigated an evolution in this music which allowed to become post-racial, and cross cultural – opening an astounding network of sonic conversations which stretch through the decades, and across the globe.

What is crucial to recognize, is that for a number of decades, younger generations of American improvisors have drawn more heavily on the territories opened the European scenes – presenting stronger connections to AMM, MEV, ICP, the scene documented by the German imprint FMP, and the English efforts which grew around Derek Bailey, David Toope, and number of others, than to Jazz. Given the diversity of approach, it is impossible to enforce any strict categorization, but what remains consistent through out (despite the many collaborations which occurred with Free-Jazz players), is a fracture with this music’s American roots.

Foster and Bennett’s efforts, as they appear across In It, represent a fascinating return – a music which, enabled by historical distance, hints at free improvisation’s roots in the blues. A hybrid music which draws on a blending of many pasts, to present a vision for possible futures. Theirs is a music of deep emotion, interplay, and call and resonance – formed by brilliant technique and a carefully honed ear. As great improvisation always is, these are sounds defined their silences as much as the note and beat, where listening has a greater role than what is played. A stunning debut by a duo that I hope to hear more from over the years, this is definitely one to get.

In It on Bandcamp: 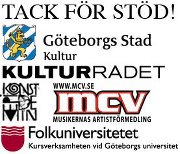